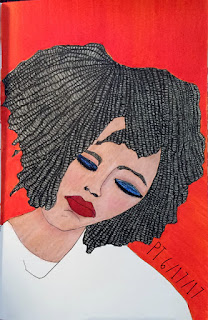 I'm up to number 30/100 in my wonky portrait series. Been having computer issues so I haven't been able to update as often as I'd like. A new computer is on the horizon! Here are a few more of my favorites. It took an entire evening (in front of the TV) to ink in this hair. Similar to another portrait with intricate line work I did on the last post. It's very relaxing though to make tiny marks and form the hair. She is my favorite in this group. Here are a few more: 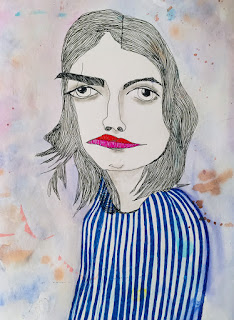 This is Miss Attitude! Ha! I just finished a class on Carla Sonheim's site with Lynne Whipple called Making Faces. We did a lot of exercises where you just let go and mixed it up. Those turned out to be the best faces! Like this one. It was a contour drawing where you look at the paper only a couple of times while you draw from a reference photo. It makes for wonky proportions and uneven features. That's what I was going for and she appeared. Doesn't she look thrilled?  :) 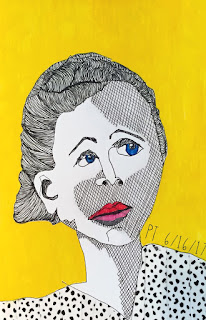 She was another experiment in letting go (something hard for me to do!). We were to once again draw from a reference and not look at our paper more than a couple times. Then we were to add cross hatching (x's) on the face where shadows would be. Makes for an interesting take . I added washi tape for her "dress". I love the wonky lines. And of course the hair.  ;) 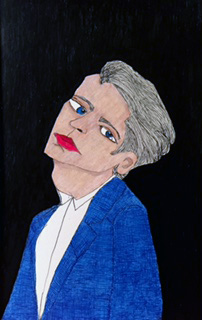 This is too funny. The model in the reference photo was a female. I hardly looked at my paper at all while drawing her. So I ended up with this guy! Ha! I did the exercise again with the same model and it looks more like a female, so I'll call that one the twin to this guy. Anyway The hair and the jacket were all very tiny ink lines. The jacket took a few hours. But I like the result (looks like fabric, I think). So he is twin #1. When I finish his twin sister, I'll post her as well. She actually has the look I was going for when I chose the model. You never know what you'll end up with when you don't control your drawing. That's the point of the whole exercise!  :)

Hopefully this computer will last a little longer until we can get out and find a decent new one. I want to use it as long as I can but it's life is definitely limited!
Posted by Pam Tucker at 3:42 PM 1 comment: