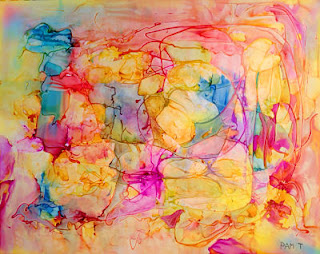 This is another painting I've done with the alcohol inks and Yupo paper I talked about in the last post. Thank you all for your kind comments! This one turned out more abstract; could be the addition of the tar gel. ;-) It kind of reminds me of stained glass with all of the different colors. I like playing with the possibilities this technique presents. It's a fun way to see how the inks blend together and interact with the alcohol. Very cool!

It's been a long while since I've had anything to contribute to Paint Party Friday. I'm glad to be able to play again this week. Check it out! I know I plan to.

Have a wonderful weekend everybody!
Posted by Pam Tucker at 8:56 PM 24 comments: 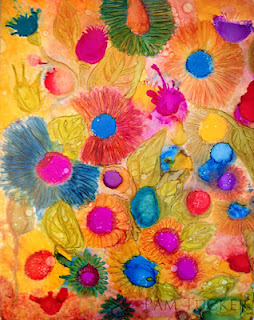 This is a painting I finished using a new technique I just learned. I've been kind of uninspired lately. But I was intrigued by an article by Cathy Taylor in the July/August issue of Cloth, Paper, Scissors magazine. Of course the colors didn't photograph nearly as vivid as they are in the painting (especially on the left side, for some reason). I'm sure it's due to my poor photography skills.  ;-)

The technique involves using alcohol inks as your "paint" and Yupo paper as your canvas. I just happened to have both on hand. Do you ever buy something thinking, "I'm going to use that someday!" That's what I did with the Yupo paper. Then when I got it, I had no idea what I had originally planned to do with it. It has a very slick surface and I have no idea what you are supposed to actually use it for. I suppose I should Google "uses for Yupo paper" and see what I get.  ;-) Anyway, this article came along at a good time. So I followed her directions and was pretty pleased with the results. This painting is just my practice piece, to see how to work with the alcohol inks on the paper. Cathy gives a lot of useful tips and techniques in her article. Now that I know what the inks will do on the paper, I am getting some ideas for what else I'd like to try!

So I've been painting with alcohol inks, some rubbing alcohol and a little CitraSolv. Lots of different smelly concoctions have been coming from the studio these past couple of days. But it's been nice to actually have something to work on again! Let's hope the positive vibes keep flowing. 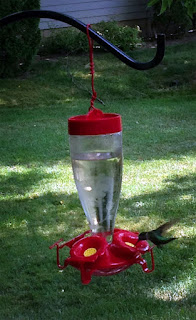 "The secret to a happy life is continuous small treats."
--Iris Murdoch, from The Sea, The Sea

This is my small treat for today. Hubby bought a hummingbird feeder while I was away visiting my friend in Ohio last week. I LOVE it! He placed it right outside the window where I sketch. This little guy comes by every 15 minutes (give or take). Now I notice there are two birds that visit. But this one spends a lot of time getting fed. I really look forward to his (her?) visits.

I took this shot through the window with my iPhone. Not bad, considering I was holding my breath because I was afraid any movement would scare him away.

I'm still not getting much art done. At least not anything I want to show. It'll come. I am working on some things behind the scenes which I'll share soon. In the meantime, enjoy the little treat for today!