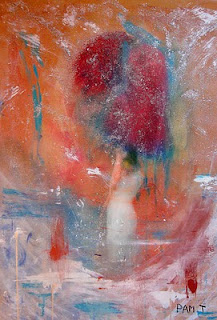 I'm really enjoying Katie Kendrick's class, Layered Impressions. One of our assignments was to paint a dream we've had. I sometimes write them down if I remember them but I've never painted one.

My mom is in a lot of my dreams. They aren't necessarily about her but she's in them. Last night she was in another one. I recently lost an aunt who died in a fire. That's been on my mind a lot. In my dream last night all I remember was a room, kind of cave-like, but with couches and rugs, like a living room. Mom was there and she was apologizing for the room being so dark because we were going to read. We used to love to read together. We would have our books and just sit for hours reading. I said it was okay but I remember thinking the room was just too dark.

In our assignment we were to capture the feelings as well as the dream itself. I call this "Turbulence" because of the unrest that I felt when I woke up. I think all of the emotion surrounding the events of the fire plus Mom's presence always with me all came out in the dream. I found it a very healing exercise.

I've been absent from Paint Party Friday for too long and wanted to have something to show today. Check out the other artists who participate. They never disappoint!
Posted by Pam Tucker at 3:22 PM 33 comments: 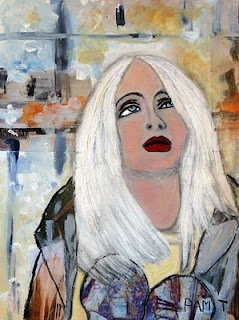 I am taking a wonderful class by Katie Kendrick called Layered Impressions. This painting is from one of the lessons. Hubby says she looks like she's hungover.  ;-)  I don't know. I kind of like the result. Starting with a found image we were to add our own touches with paint and collage. The goal wasn't to get a realistic face but just to see what the papers and paint were leading us to do. This class is so much fun! Katie has a very laid back teaching style and I love the techniques she's showing us.

Also this week I'm getting ready for my trip home to Ohio to visit with my friends. I'll be leaving next weekend and will be gone for a week or so. I'm really looking forward to that. My knee is still giving me fits but it is trying to heal (slowly).

I'm working on a few other pieces right now and hope to post again before I leave for my trip. Have a great week everyone!
Posted by Pam Tucker at 5:48 PM 9 comments: 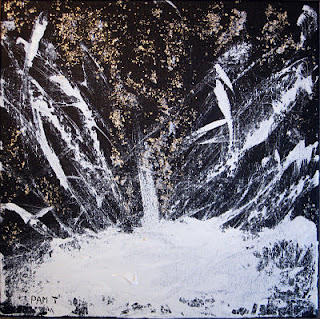 "And in a burst of light that blinded every angel
As if the sky had blown the heavens into stars
You felt the gravity of tempered grace
Falling into empty space
With no one there to catch you in their arms."
--from "Iridescent", by Linkin Park
I'm often inspired by music and poetry. This song has been playing on my iPod constantly. There has been a lot of frustration for me lately. Maybe it's because the knee is still not completely healed. Sometimes when I'm hurt or sick, little things will often become magnified. Aarrgghhh! Then I find myself having little pity parties. Well, I have to stop that. I have to keep reminding myself that the little things are not worth it and I do need to just let them go. Otherwise I let them eat at me and take what little energy I do have.  :(
So I went to the canvas and the verse I quoted above really stuck with me. And when I started to paint I just let it ALL go. It felt good! :-) I have these gold mica flakes that I love to use for special effects. They don't show up very well in the photo but on the canvas they really shine, like little stars. This piece makes me happy. That was my goal when I started, so mission accomplished! Here's the song that started it all. I hope you like it as well as I do:
Posted by Pam Tucker at 1:18 PM 13 comments: 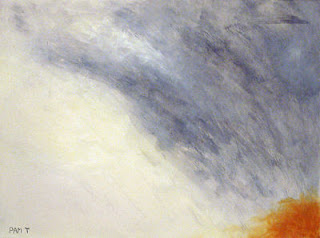 After a long, dry spell I'm slowly working my way back into the studio. This was an experiment with graphite powder and acrylics. Fun, but messy. ;-) I'll be doing more with the graphite. I'm still mixing it with other media and playing. I saw these lines in a poem called Statuary by Katherine Larson and was inspired:

"The late cranes throwing
their necks to the wind stay
somewhere between
the place that rain begins
and the place that it ends
they seem to exist just there
above the horizon at least
I only see them that way
tossed up
against the gray October
light ... "
I also took a tumble down the five steps that lead into our garage while I was unloading groceries from the car. Yes, I landed in a big pile on the concrete floor. My knees and wrists took the brunt of the fall so it could have been worse.  I'm on the mend now. I haven't fallen in a while. It always scares me when I do. No broken bones, just many bruises and a swollen knee.  :(
The Summer stupor has started to wear off and now I'm beginning to feel the energy that always seems to accompany the beginning of Fall. It's about time! I have a few things in the works and hope to have something to share later this week.
Posted by Pam Tucker at 10:32 PM 14 comments: